Mum’s anxiety has become quite worrying. We know she is coping with quite a lot at the moment; Dad has moved into a home so she can’t pop in and visit every day as she used to. And although she moaned about getting his newspaper she liked to pop in with it for the company. They would have coffee, argue, and then she would go off quite happy!

We are also selling her house and she calls at least twice a week to ask when she needs to start packing and will the new place we buy for her, (well, she buys for herself), be clean! Poor thing it is a lot to cope with. However, as many of you who care for a parent with dementia know, it can also be a stress for you.

This weekend was a bit of a crisis, we had the packing question several times and also the loss of her bus pass. No doubt many of you have had to handle similar situations so I thought you might like to hear of a tactic that seems to work for mum.

Mum called hysterical, saying dad had been round to her house and stolen her bus pass and her dentist appointment card. She knew he had been after them for ages and now he had got them!

Of course he can’t walk so there’s no chance he did have them. Mum insisted that this was just an act for him to get sympathy from us and he was well enough to come and steal the items.

In some ways she seemed more worried about the dentist appointment card because she said she had lost it so many times. She had been in to ask the dentists’ receptionist several times to check the date of the appointment and now she feared they would think she was losing her mind. Uh, well, maybe there is something in that! No, I didn’t say that to her but I jolly well did think it!

The trouble with these episodes is the more logically you try to be, the worse mum gets. Reluctantly she re-checked her handbag. She was extremely irritated about my suggestion she do this as she believed she had already looked there. That after all was how she discovered the ‘theft’ in the first place!

We then went through every coat pocket. I can tell you there were a lot, and I had to have a rundown of every colour, what weather to wear it in, the history of the purchase and where they were kept in the wardrobe, before I could get her to open the pockets. Seems any open zips were more evidence of theft as she never leaves zips open! 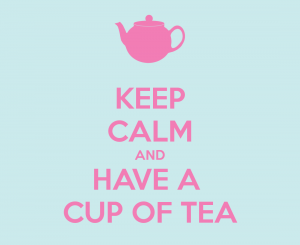 Finally all coats had been checked and the tears were at hurricane level. I eventually persuaded her to sit down, have a cup of tea and retrace her steps in her mind and I would call her back in 30 minutes.

Twenty minutes later the phone rang. She had found the bus pass on the table next to her handbag. The very bag we had been going through and also the dentist’s appointment card was ‘back in the handbag.’ I didn’t have the heart to ask who had put it there as there was a touch of shame in her voice.

So, if you too have someone who loses things or has a ‘thief’ in the house, a cup of tea can work wonders!