Dad used to be very active and one of his frustrations since dementia and NPH set in is that he can’t really get outside. When he was fit he would be out working all the time, mainly doing old jobs and gardening for his ‘ladies’ but also walking the dogs, taking them to shooting events where they retrieved the birds, and generally being very active. He would also go sea fishing occasionally.

Recently he has become convinced he does go out. He’ll tell us about how he starts off walking to visit mum or to go to the shops to buy things he wants. It sounded so real at first that we thought it might be true but a discussion with the manager of the Care Home convinced us that the front door is always locked and he hasn’t been going anywhere.

However the fantasies persist and every few days he tells us he has been somewhere or more often tells us he started off but had to turn back because his legs were just not up to it. 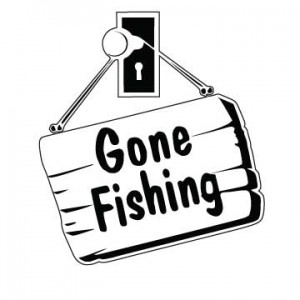 While the weather was good he had a new venue. He believed he could see the sea from his window and that he was going down to the shore to fish. The fact that he has no fishing rods or other equipment made no difference. He was even telling us what colour the sea was and how big the waves were based on their sound. On one particularly windy night he said they even woke him up!

Now, all of this may sound nothing special but you see whilst the view from dad’s window is quite nice, rolling hills out beyond the garden of the home, there is no view of the sea. In fact, there is a motorway in the distance which is always busy with traffic and can be heard from the Care Home.

I guess hearing the sea and believing it’s close enough to think about tottering off to fish is better than listening to the traffic whiz by!