Dad was in good form last night, full of stories about the other residents at the Care Home. He is still a bit overwhelmed by the number of ladies there and the fuss they make of him but it is getting easier.

He tells me one of the issues is that everyone is so old! This is a persistent theme for Dad, and I guess for most of us. We don’t really feel our age even if there are a few saggy bits, wrinkles and problems with the workings.

Dad described one of the other guest’s, a man, as a ‘poor old feller’ and sometimes as a ‘poor old bugger’, even though I suspect he is about the same age as Dad. Seems the poor man makes quite a lot of noise when he eats. Going Tus, tuss, tuss, umm, umm, all the time. All that pursing of the lips means quite a bit of cake can come flying out during teatime. The ladies prefer not to sit at his table for fear of their clothes getting covered in flying cake! 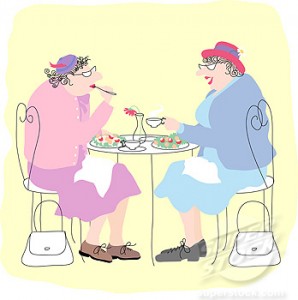 It seems his hands are a bit shaky too because Dad was giving him advice on how to eat his fruit fool. Poor man prefers to use a fork and keeps missing bits, as would anyone when trying to eat a fool with a fork! No amount of advice from Dad would get the poor old fella to use a spoon.

Sounds like he is just as stubborn as Dad. They should become good friends!