In The Lady in the Mirror we mentioned mum’s latest delusion was a new friend who lived behind the mirror. Here is our promised next instalment of the ongoing story.

One day it seems the lady came out from behind the mirror. Whilst at first mum seemed quite happy, telling me her new friend had gone shopping with her, it turned out that what she wanted to buy was different to what mum wanted to buy so then the ‘friend’ became a bit of a nuisance.

Mum didn’t want her in the flat all the time and she most definitely didn’t want her wearing her clothes. It seems she insisted on wearing things mum no longer wanted to wear, like her brown skirt. It also seems the mirror lady was responsible for quite a lot of mess: spilling tea and forgetting to wipe it up, messing up the newspaper and leaving washing around the place. Things mum would, of course, never do!

Mum became quite upset about all this and whilst we suggested that the lady was perhaps in her imagination, no amount of reasoning would last for more than a few minutes, the ‘friend’ kept coming back.

We then suggested mum ask her to leave. No result!

Next we suggested mum ignore her but she insisted the friend kept intervening.

We were getting rather worried at the distress this was causing mum and so asked the carer if she could try covering the mirrors, hoping mum wouldn’t be able to see her anymore.

Mum’s wonderful carer just happened to have a roll of sticky paper in her car and so she covered the main mirror in the bathroom and took the other mirrors off the walls and stored them so that mum couldn’t see her reflection in them.

Great idea, we thought! But no, mum’s wardrobe doors are mirrors and so the lady just appeared in them instead of in the bathroom, plus mirror lady now went up and down in the lift with mum! Yes, you’ve guessed it, there’s a mirror in the lift!

Oh and she was also in Marks and Spencer looking at the exact same clothes as mum, and in the coffee shop having coffee every time mum was there.

It became clear that mirror lady was to be a permanent fixture at least for some time to come and so mum’s carer suggested that perhaps it would be nice to find out her name. It turns out her name is Mary! 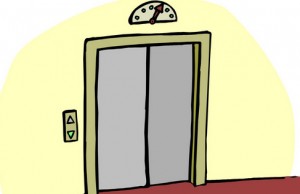 Now whenever my sister goes for her weekly visits and travels in the lift with mum she is introduced to Mary and she has to say, “Hello Mary, how are you today?” Then mum waves goodbye to Mary as they get out of the lift, only to say hello again when mum goes into her bedroom and sees Mary in the wardrobe mirrors.

The good thing is that they have now become firm friends and mum says Mary is very clever as she manages to wear the exact same outfit as mum even when mum changes her mind and puts on something else to try to fool her.

“I don’t know how she does it. She’s very clever”, says mum in admiration.