After a long and rather worrying process, mum has finally completed on the sale of the family home and moved into a warden assisted flat, one in which there is a manager to monitor her safety and an alarm system should she fall or need help.

It is close to the town so she only has a short walk to the shops and we are hopeful that she will become friendly with some of the other residents. The manager and her husband are a really lovely couple, caring without being intrusive, and they run events for the residents so that they have some social life.

Before the move a wonderful neighbour helped mum for weeks to clear her garage. What treasures they found; brand new dinner sets, saucepans and cutlery which mum had purchased over the years and never opened! Mum has always been one for buying stuff. Seems some of it never even made it into the house!

There was, of course, also lots of rubbish, years of items in the loft that my son, nephew and I had to clear out. What an adventure! 57 years’ worth of stuff! All our old toys, including dolls from every era, baby to Barbie. My shoes from my twenties including dark green platform shoes which of course are all the rage again! Goodness knows how I walked in them! One of those painted mirrors which has also come back into fashion and my teenage reading, most of which my son took. He was clearly rather impressed that his mum had once read radical thinkers. Just the stage he is at now.

We also found our old record collections, many of them in good condition. These went off to my son too, with great classics like Elvis, the Beatles and loads of Northern Soul which was my passion. Plus more kitchen gadgets than you can imagine. You could trace the fashion in cookery through the years with gadgets from magi mix to chicken crocks to slow cookers to pineapple cutters to a hanging device for ripening bananas! 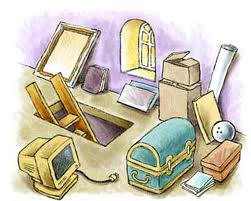 It all took ages with the boys moving items down through the loft hatch and me carrying it to the garden where mum and the neighbour sorted it into piles – rubbish of different types and decent stuff for the charity shop.

Mum worked pretty hard all day helping the neighbour, then at the end of the day when we were all tired and very dirty, mum suddenly said, “Isn’t it a disgrace? Those people putting things in our loft.” “What people?”, I asked. “Well”, she said, “the people who put all those things in our loft! At least two or three families must have been getting up there and storing their old stuff in there”, she said.

When I pointed out it was hers she looked at me in disbelief and said I was wrong, she would never have rubbish like that!

“That isn’t my stuff and anyway there was enough for several families!”, she insisted.

Yes mum, maybe you have acquired enough for several families over 57 years, given how much you like to buy gadgets! I thought it but didn’t dare say it!

Mum is still insisting the neighbours are a disgrace causing her all that work removing their rubbish. I hope they aren’t upset when they realise it’s all been given away!