As we mentioned in Supporting parents who are Fifty Shades,  mum has been very concerned about her rights to the family home. She had convinced herself that the deeds were only in dad’s name and no amount of reassurance from us would convince her that she owned half of the property. In the end we stopped trying and suggested if she was so worried she should speak to a solicitor, which much to our surprise she did!

Quite what she told the solicitor we have no idea and as she knew nothing of mum’s condition my sister wrote a brief letter detailing mum’s health issues and enclosing her diagnosis from the doctor. My sister also pointed out to the solicitor that for medical reasons the doctor had said that mum was not to be shown the diagnoses. My sister was privy to this information because she had attended all appointments with the doctors at mum’s request.

Some weeks went by and then one evening on the phone mum told me a large letter had come from the solicitor. She didn’t know what it said as it was too many pages. Mum told me where she had put it, under the doily on the heated trolley!

She said she would give it to my sister next time she was at the house so that she could explain what the letter said. She also mentioned she had an appointment with the solicitor and would my sister go with her to explain what was said as she found it hard to follow.

How an obviously intelligent woman could have done this is beyond us. But luckily it seems Mum did not read the pack stating it was too thick and had too many pages.

When the time for the solicitors appointment arrived mum handed over the large envelope which she had finally found. The solicitor quickly confirmed that these papers were indeed the deeds to the house in joint names and she showed mum her signature just to make sure she fully understood that she had signed as a joint owner of the property.

So really there had been no need to go to the solicitors after all but at least mum was now convinced she owned half the house – at last!

Mum has made cross stitch pictures for years. Most of them are sugar sweet, chocolate box type pictures that she has scattered around the house and from time to time has given to family and friends. 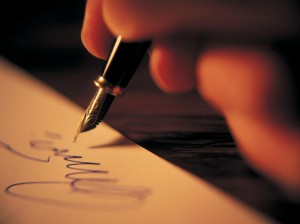 A rather long and tedious conversation ensued as she described in minute detail each cross stitch, explaining why she must have all the details in her Will because she didn’t want people falling out about them and how she must be the one to decide who has what –

“The one which is all blues and greens with the dogs playing is for….”

“The lady with the crinoline in pinks holding a basket of flowers, a really lovely one you should see it, that one is for…”

“The one I gave to Irene is to stay with her. It is of flowers in orange and autumn colours…”

After a while my sister left them to it. After all a Will is confidential!  I suspect the solicitor still has a headache and so might she after her carelessness. Perhaps there is a thing called divine justice!