As previously mentioned we have moved Dad to a home. He loves it but is being a bit slow in getting to know the other residents or guests as they are called by the staff. luckily he had to move rooms and this has put him in the pathway of the lounge so if he leaves his door open he gets lots of short visits from the others and they have a little chat along the way.

I have been asking him what the other guests are like. There seems an interesting mix. First of all there are many more ladies than men, something to do with the demographic of women living longer. There are only three men and the rest of the guests are women although there is one couple who are in the home together. And Dad says seem quite happy. 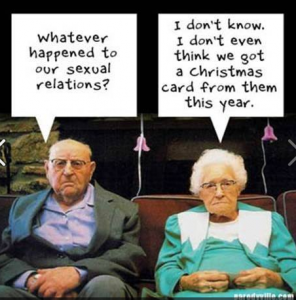 The ladies sound like they are rather keen for male company. Dad was extremely good looking when he was young, almost film star good looks and this has not entirely faded so I can’t really blame them making a bit of a fuss, especially as he can also be quite funny and always has a joke and a smile.

However he is struggling a bit with the ladies. ‘They keep fussing around me and trying to help me walk’. He says.’ I don’t like it when they do that. Also when I come into the lounge that wave and smile trying to get me to sit next to them. I have nothing to talk to them about, well not much beyond the weather and that gets a bit boring. They just talk about women’s stuff.’  I tried to persuade him that maybe with a bit of persistence he would find they did have similar interests.

He likes to read so we discussed the idea of starting a book club. They could all buy the same book read it and then discuss it. That would give them something in common to talk about. He was a little surprised that everyone would be able to get the same book, but I let that go. Eventually after coming out with a number of excuses he said the issue was he didn’t want to get too close to the ladies. ‘I don’t want another wife one was enough for a lifetime. She a lovely woman but it was very hard going and I don’t want to be caught out like that again’

Oh well after all they were only married for 60 years so best to remain fancy free for the remainder. On a similar note Mum was telling me how she likes her freedom and her ‘space’.

Really what is becoming of the older generation!