We mentioned that since mum’s dementia has progressed she has an imaginary friend who she calls Mary. The idea of naming the friend was suggested by mum’s carer who felt that mum would be less concerned if the ‘person’ had a name now that she seems to be around permanently (see Mary of the Mirror).

Well, for some months this worked quite well. Mum began to talk about ‘we’ when describing anything she did and when we enquired who the other person was she would say, “you know, Mary!”

During the summer they became firm friends. Mum would describe the conversations they had during the day, what they watched on TV and what Mary liked or didn’t like, where she wanted to go or not go, and how she helped mum to decide what to do.

At some level we believe mum knows that Mary is a part of her imagination but she is good company and has stopped pinching mums clothes or wearing things mum doesn’t like so they now get along well. It is not unusually to call in the evening when they are having a glass of sherry together!

Then someone else began to appear. This wasn’t Mary but another imaginary friend. She had no name and when I suggested we give her one, mum decided to consult her. There was silence on the phone for a few minutes and then mum came back on the line and said that she (this other person) didn’t want a name. “Oh”, I said, “we can refer to her as No-name then.” This sent mum into pearls of laughter and giggles. 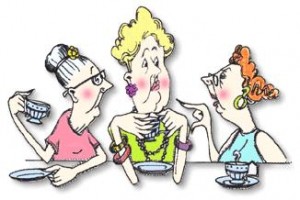 No-name stayed around for a while seeming to divide the labour with Mary. We’re told that Mary has become the lady who does the washing and ironing whilst No-name keeps mum company. Oh and Mary no longer likes to go out so No-name goes with mum.

No-name was also very handy when mum couldn’t remember a word. Mum would say she was going to ask No-name what it was. Again there would be a short period of silence on the phone and then mum would come back with the word!

Isn’t it amazing how the brain works!