We’ve told this dementia story before but had to take it down due to spammers loving it on our old site. Now it’s definitely worth repeating here because it still makes us giggle…

One day during March there was ice on the ground even if no snow had settled in the South where my parents live. I called dad early as he had not been feeling well the night before. It is always a double worry when he’s not feeling well because then he is more prone to falls.

Anyway, I got lucky. He answered the phone quickly and told me I had just caught him as he was off shopping because he had no food!

Now, each week my sister takes dad enough Marks and Spencer’s ready meals to last him for a week. Along with the ready meals she stocks him up with milk, bread, tea, coffee, bacon, sausages, eggs, cereals, cold meats and cheese. She clears anything out that is past its sell by date and generally makes sure he has everything he needs until she can return.

She is always trying to tempt his appetite as we worry he forgets to eat. So when Dad said he didn’t have any food, I knew that couldn’t be right. I gently questioned him. “No”, he said. “She hasn’t been here for two weeks, I haven’t got any food!”

Gently again, it’s really hard to tell your father he is always wrong! I suggested I had spoken to my sister just after she restocked his fridge a couple of days ago and maybe he should have another look. Again he insisted there was no food.

Eventually he grudgingly agreed to go and look again insisting my sister must have put it in a different fridge! Strange that, he only has one fridge! Anyway, to cut a long story short, he finally promised not to go out into the freezing cold. 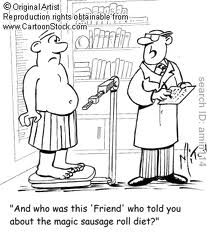 Later in the day my sister rang him. Alerted to my concerns she asked what he had eaten that day. Of course he had been shopping! “Yes, I know I had food in the fridge but I get fed up with those M&S meals and I fancied a sausage roll!”

Goodness, sometimes it feels like a brick wall but you do have to remember that our dad’s spent a good deal of their lives suggesting how we ran ours! I guess I didn’t take much notice of him back then so why should he take any notice of my concerns now? He probably thinks I’m making a big fuss over him getting cold for the sake of a sausage roll?

A funny postscript from my sister: “When I went round yesterday to restock Dad’s fridge I found a rather sorry, old looking, sausage roll in a bag on his coffee table. On querying whether I could throw it away, dad said, ‘Yes, throw it away, I’m not buying those sausage rolls again, they were horrid!’”

Better stick with your M&S meals then dad, a? 🙂