The context for this blog is in For the love of Violet and Policing your parents love life. If you have not read these blogs you need to know that dad formed a close relationship with one of the other residents at the care home where he lives.

Mum has become increasingly forgetful and unable to put together coherent sentences. It can be very slow and quite painful to have a conversation with her these days.

She can’t remember almost every other word, especially nouns. I spend most of my time trying to guess what she is saying so I can prompt her with the next word.  For example, “Today I went to the ….. urmm you know, where the urmm are…. You know that place…” From me, “Shop?, Market?, Marks and Spencer’s?” and so on, until I hit on the right one. Or give up the conversation.

It’s even more tricky when the verbs and adjectives go missing, then there is really just “Today…urmm”. Of course it is very frustrating for mum too and she says things like “Oh it just won’t come out” or “I’ve lost it”.

Despite all this, there is one sense that seems to be improving and that is her sixth sense. 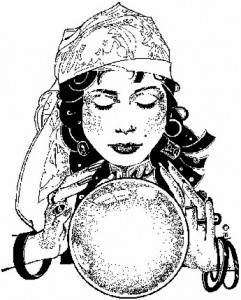 She told us she thinks dad has another woman and it is someone at the Care Home. Amazingly she told us this before even we knew and a little while later we found out it was true!

Then she told us that the management of the home were asking dad to leave and he has to go and live somewhere else. Again before management told us!

On both occasions we dismissed it as one of her delusions but as both utterings have turned out to be true we’re listening a bit more carefully now.

What will the next prediction be?  I hope it’s a good one this time…