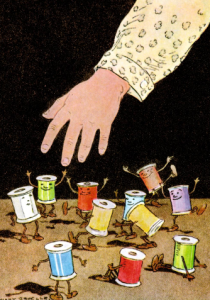 I mentioned in our last blog that I had asked Mum to complete a cross stitch for a friend who is having a baby. I had hoped the project would give her some focus as she used to love to do cross stitch pictures. Alas not. She seems obsessed now with telling me how it should be done but can’t seem to make the connection that if she knows all of this fine detail she could do it herself.

She is the same with altering some trousers she bought which were too long. She knows how to do it she just no longer seems to be able to physically do it. I am not sure if this is a symptom of the illness, a lack of confidence or what. Anyway there is some good to come out of this, the Cross Stitch Fairy has delivered three pattern books to Mum’s book shelf. One of them for baby cross stitch patterns. I was treated to the minute details last night; On page 52 there is a letter alphabet so you could us that to make up the name. It has big and small letters. On page 53 there is a lovely teddy bear just right for a baby picture. On page 54 on-wards there at patterns for cats, some sitting, some laying down, some you can see the legs some you can’t…

We went back to the cats several times even though Mum also went to great pains to tell me she doesn’t really like cats and would prefer the patterns were of dogs, which she does like.

The fact that the cushion cover she has now returned to me has the pattern already printed on and all the instructions seems to have gotten lost in her mind.

Oh and Mum has no idea where the books came from. She says someone must have delivered them to her shelf. They must have known she had been thinking about this cross stitch. She is insistent they were not there last week and she has never seen them before. They are from Australia so it must be the Australian Cross Stitch Fairy that has been visiting.

We haven’t had a delusion for some weeks and had grown a bit complacent. At least it’s not the missing ham out of the fridge this time!