When I called dad yesterday I was rather surprised to be told he couldn’t come to the phone because he was at a meeting. Now the home do have sing along sessions quite regularly which both dad and mum (used to) love. They get really into singing along to the 50’s and 60’s songs and amazingly they can remember all the words. It really lifts their mood. But a meeting was clearly a different matter!

“What type of meeting?”, I asked. “Oh, the food committee”, was the response. “Please leave a message or call back later”. I chose the latter.

Leaving a message would make no sense to dad and I would never know if he got it because by the time I spoke to him again (even if it was a couple of minutes after the message had been delivered, he would have forgotten getting it!)

“I’ll call back”, I said. My sister and I had to laugh as dad could hardly be of much use to the management as he can never remember what he had to eat 10 minutes after he’s eaten it and he seems to have no idea what meals he would prefer. The only blessing about this further lack of memory is he no longer complains all the time about his bacon sandwich being cold in the mornings.

But when I spoke to dad the next day it appeared he did remember his role on the committee. “Oh yes”, he said “I was at a meeting!” “Oh, what did you discuss?”, I asked. “Well”, he said “I asked for more steak. But I know I won’t get it!” “Why’s that?”, I asked, “Would people have trouble chewing it with false teeth?” “Oh no, their teeth are ok they just won’t give it to us, it’s too expensive and no one else supported me in asking for it.” “Oh, that’s a shame. What did the other residents want?” I asked. 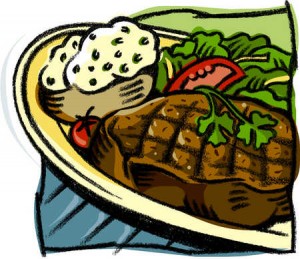 “Well”, he replied, “they were useless. The young girls (no one is under 70 years old!) just made outlandish suggestions for fancy foreign food and the old girls just gossiped about what the youngsters had said and how demanding they were. They were shocked that women spoke up in front of the men.” Seems equality is alive and well in Britain’s nursing homes!

Whether dad did remember all this or he just made up a story to explain his absence from the floor when I called, I have no idea. If he did remember, it’s a lot more detail than he usually remembers but that is the weird thing about dementia. Some things seem to stick and others just go almost at once and it doesn’t seem to be predictable. Let’s hope he remembers eating the steak if he gets it!