Mum has suddenly completely changed her mind about dad. You can read why they are separated in ‘In the beginning, Part I and Part II.’ It is not a happy story!

There have been times when she has been very unpleasant to dad even though he has maintained great affection for her. Now mum seems to be reverting to a previous era. It really is odd to have her telling us she is ‘in love’ with her husband when only 2 years ago she was throwing him out of the house.

Over the last few weeks she has been ultra-nice to him. At times too nice! We took them out for Dad’s birthday and she insisted on holding his hand whenever he wasn’t cutting his food and frequently asking him for a kiss. Poor dad he looked unsure what to do or say. He certainly looked quite baffled.

Then the amorous behaviour started causing a few problems at dad’s care home where he lives. Mum has decided to make the journey alone to visit him. She’s been going quite frequently and when she gets there she insists on sitting on his lap. One of the poor carers told me they had to close the bedroom door as they were ‘getting very close’.

My sister also takes mum to visit dad once a week at the home. Last week my sister left them alone for a while to take a phone call and when she came back she found mum sitting on dad’s lap, holding hands and flirting rather suggestively. My sister wasn’t sure how to react!

I asked dad the next day if he had a nice visit with mum. “Yes”, he said “I don’t know what was up with her though. She was making eyes at me. She hasn’t done that since she was in her twenties. It was a bit scary. I didn’t know what to make of it.” 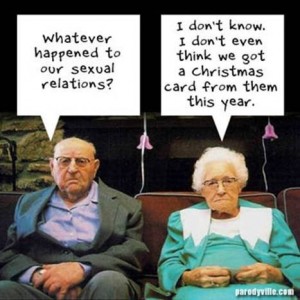 Mum’s version of the story was even more strange. She said dad had asked her to pop into bed ‘for a cuddle’ whilst my sister was out of the room on the phone. When mum pointed out that she could come back to the room at any time, dad supposedly suggested the bathroom as it has a lock on the door!

Then yesterday mum said she was going to ask the doctor if it is ok for them to have sex. My sister nipped that one in the bud by telling mum she had already checked with the doctor and it was not advisable given they both have heart conditions!

It is all most strange; each evening when we call, mum asks how dad is, if he has asked about her, in what tone of voice and if he wants her to visit again.

It is like being around a love sick teenager and I think that is essentially what is happening. Mum has regressed to a younger age in many respects, and it seems this has included her feelings for dad.