In the main the dementia nurses who visit mum are great but every now and then they can unleash a can of worms!

A nurse comes roughly once a month but for some reason hadn’t been for a while and as mum was being particularly odd we had asked them to make a visit. The nurse gave mum another memory test and again the score had dropped significantly. Then came her big mistake! She suggested mum might like to consider moving to the Care Home where dad lives rather than living alone in her flat.

My sister and I were a bit stunned by this as we had consulted with the mental health doctor and nurse before mum finally completed on the purchase of her flat, and they had been supportive of the idea. Mum had only been there less than two months and we hadn’t expected to move her that quickly!

As we mentioned in an earlier blog mum has decided she is ‘in love’ with my father again. She has become obsessed with him, constantly asking about him when we call and going to visit him virtually every day. Luckily the Care Home where he lives had been very patient and nice about it but that was about to change…

On the day the nurse made her suggestion, mum announced she was moving into the Care Home with dad. My sister and I had a chat about it and I asked dad what he thought. He was happy for her to be there as long as she had her own room and he could get away to his for when she was a ‘bit off”. “You know”, he said “she is alright at the moment but she can change. She’s a lovely woman but can be difficult to live with and I like to have my own space these days.”  Fair enough!

Mum’s love sick behaviour got more extreme as the week progressed.  She had been turning up to the Care Home every day and on one occasion even persuaded dad that he should go home with her so that they could share her single bed! She said it would be a little holiday for them both.

Poor dad had his coat on and was heading for the front door when intercepted by a Carer. He complained bitterly they couldn’t stop him from leaving and I had to explain that mum would not be able to help if he fell and anyway her bed was far too small for both of them!

My sister and I had misgivings about the whole idea of mum moving to the Care Home and heartily wished the nurse had never mentioned it! We had no idea how long the ‘love affair’ would last for mum – a week, a month, years?

As the mental health nurse was not forthcoming with any practical suggestions we decided to make an appointment with the manager of the Care Home. She obviously knows dad well and had previously been the head nurse at Older People’s Mental Health when all the problems with mum and dad originally blew up, so she was familiar with the issues and history. However, we never made it to the appointment with the manager!

On a rainy Thursday mum turned up at the Care Home soaking wet having walked the 2 miles in pouring rain. The staff being concerned for her suggested they call her a taxi so she could go home and get out of her wet clothing, but she refused. She insisted she must see dad even though he was at an eye appointment. She said she would not leave until she had seen him.

When the lovely manager suggested she drive mum home to get changed mum shouted at her that they were just trying to stop her seeing ‘her Johnny’. She said they didn’t understand how much she loved him and needed to see him and that she was not leaving. They called my sister so that she could try to reassure mum but that just made matters worse and mum started screaming that she was going to the papers if they wouldn’t let her stay. In the end she refused to speak to either of us, saying we were on ‘their side’ and she wasn’t leaving whatever anyone said. 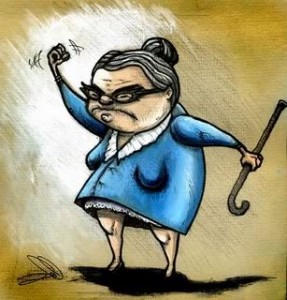 Next we phoned the mental health nurse and the local doctor for help thinking either mum had not been taking her medication or she had some sort of infection that was causing the extreme behaviour. Eventually my sister had to drive two hours to go and assist the Care Home staff as mum was making such a fuss and had even hit one of the staff. As my sister arrived the mental health nurse also turned up having been called by both the Care Home staff and by us.

Everyone was in shock by mum’s unexpected behaviour but it seemed no real help was forthcoming. After both my sister and the mental health nurse spoke with Adult Services we were told there was no help they could give because mum could wash and dress herself!  We said we suspected she had not been taking all her tablets and this might account for the extreme behaviour. We thought surely someone could come each day to check that mum was taking her medication? No, we were told, the only criteria is to be smelly and unable to dress!

To cut a long story short my sister eventually got mum back to her flat and that evening we hired a private carer who now comes in twice a day to ensure mum takes her medication correctly. We can manage that for a while but mum’s money will eventually run out. At least for now we have a solution and mum is calm again.

The lovely people at dad’s Care Home have said that mum can’t go and live there, not so much because of her behaviour but to protect dad. He was shocked about the whole scene, saying mum seems to have lost her mind. Things have calmed down but after a situation like that we are on tenterhooks each time the phone rings.

Now that mum is taking her medication regularly her passion for dad is at simmering rather than boiling point. She visits him but she no longer wants to live at the Care Home. Instead they are planning to buy a caravan and move in together just as soon as they both recover from old age!