Following on from mum’s delusion that dad keeps visiting her in her flat and sleeping in her chair, one day last week she found a new friend. My sister called her and had the strangest conversation…

Mum kept losing focus on my sister and talking to someone else. When she asked who mum was speaking to, mum replied that it was a young woman in the mirror.

A little puzzled my sister enquired further. It seems mum was seeing a young woman in the mirror who wanted to come out but was having trouble getting out. Mum spent ages coaxing her. “Come on, it’s ok, you can come out, come on”, she kept saying.

It became impossible to hold a telephone conversation because mum was chatting away to the mirror lady throughout. Then she began repeating what my sister was saying so that mirror lady could give an opinion.

At first we though mum was a bit confused and perhaps seeing the reflection of one of her needlepoint pictures in the mirror (they are all over the walls and most are of girls in crinolines). But after some days of the same behaviour we realised this was a delusion and that mum was seeing a younger version of herself in the mirror. Discussions with the mental health doctor confirmed this is not unusual. 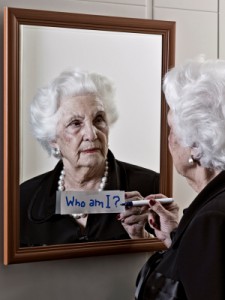 Mum continued to go through elaborate procedures to try to get the lady to come out of the mirror but to no avail. When we gently suggested to mum that she was seeing her own reflection she went into a long explanation about the room behind the mirror where the lady lived. Of course this was really a reflection of the room she was in and in the moment when we physically turned mum around she could see that, but then almost immediately she went back to her chats with her friend.

In the end we decided to leave well alone as this ‘friend’ seemed to be providing some company. Then one day things took a turn for the worse; it seems the lady had come out of the mirror and mum was not so happy about it!